I Needle Felted another Whoopi Doll for #whoopi

I work from home and I have a rule that I don't answer the business phone before 9 a.m.  This particular morning I was feeling quite chipper and answered the phone at 7:30.   It was a customer that needed help placing an order
for her needle felting supplies.  We had a lovely chat as I helped her out and as we were hanging up she caught me with one last thing - she told me she loved my Whoopi doll and it was what inspired her to ever start needle felting.  That made my morning!


Here is a video of my original Whoopi Doll


My business is online and the phone doesn't exactly ring off the wall all day so a few minutes later when the phone rang again, I thought my customer had forgot something.  But the caller id was different.  New York it said so I answered.

The caller also wanted to discuss my Whoopi doll and was inquiring about it for her boss - Whoopi Goldberg.  It WAS still early and it took me a few moments to process that I was speaking with a producer from The View.


Once I gathered my composure, I explained that the doll she saw on my website had been made on commission and I didn't have it in my possession.  When she asked if I could make another the word "SURE" blurted out of my mouth.

Making the wool look a real person one time is a fun challenge but making a replica of one I've already made had me worried.  Especially when it was FOR the actual real person.


That call really made my morning!  But a few moments later the phone rang again.  It was another customer calling to place an order.  My customers and I have needle felting in common and conversations can get pretty fun during phone orders.  I shared my excitement about what had just transpired and she told me that I better check my horoscope - "it must be off the charts" she said.

Later that day I remembered to check my horoscope.  I don't follow it so I just picked the first astrology site in my search engine.  The first words I read when I landed on my horoscope for the day was that the phone would ring early and I probably should answer it.  LOL - my customer was right!


Pushing doubt aside, I poked forward.  I didn't want to keep Whoopi waiting so to speed things up I had to ask another of my dolls in progress to sacrifice their body.  The doll happened to be li'l Dolly Parton.  She seemed fine when I tore her head off and made a few 'modifications' to her body.  I did promise her a new body, so one of these days I'll make her the best li'l Dolly body ever!


In the middle of creating new Whoopi, as the entertainment world goes, the segment of the show they had planned to use my doll for was changed but Whoopi hoped I might send it anyway - for herself.

So, I finished the doll and sent it off to New York City.  I'm always nervous about sending my work but it turns out my doll arrived in the studio right in the middle of a photo shoot.  And that's how I got such a fabulous photo to share!

Thanks for letting me share my needle felting fun!  And thanks Whoopi!!

Commission an original Felt Alive caricature of YOUR favorite person! 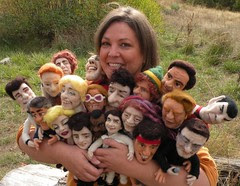